Astronomers have discovered the largest known galaxy – 153 times the size of our Milky Way.

By comparison, the Milky Way is just under 106,000 light-years across.

Recognized as a giant radio galaxy, Alcyoneus contains a host galaxy along with massive jets and lobes erupting from its center.

Astronomers have discovered the largest known galaxy – 153 times the size of our Milky Way. The galaxy called Alcyoneus (pictured) is about 3 billion light-years away from Earth and about 16.3 million light-years long. 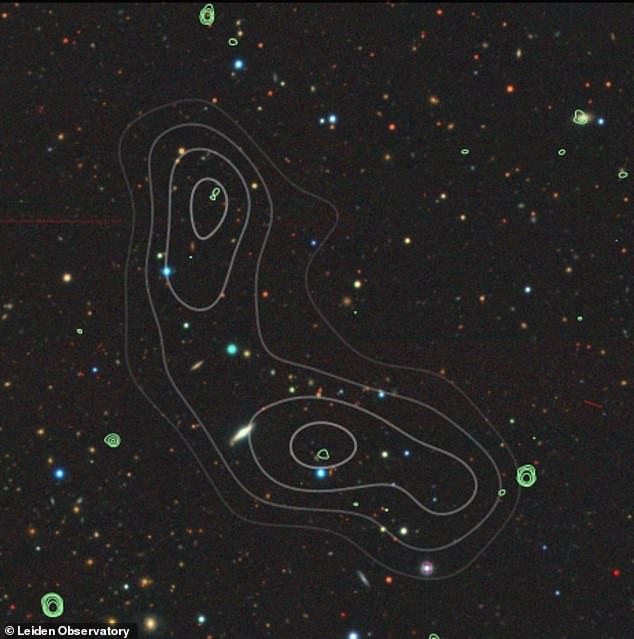 Alcyoneus (pictured) has been identified as a giant radio galaxy, containing a host galaxy, along with massive jets and lobes erupting from its center

What is inside a black hole?

Black holes are strange objects in the universe whose name derives from the fact that nothing can escape their gravity, not even light.

If you venture close to you and cross the so-called event horizon, the point where no light can escape, you will also be trapped or devastated.

For small black holes, you would never survive such a close approach anyway.

Tidal forces close to the event horizon are enough to stretch any material until it becomes just a string of atoms, in a process physicists call “spaghettitation.”

But for large black holes, such as supermassive objects in the cores of galaxies like the Milky Way, which weigh tens of millions if not billions of times the mass of a star, crossing the event horizon would be event-free.

Since it should be possible to survive the transition from our world to the black hole world, physicists and mathematicians have long wondered what this world would look like.

They turned to Einstein’s equations of general relativity to predict the world inside a black hole.

These equations work well until the observer reaches the center or singularity, where, in theoretical calculations, the curvature of spacetime becomes infinite.

Little is known about these mysterious radio galaxies, but experts believe that the jets and their associated lobes are a byproduct of an active supermassive black hole in the galactic center.

A black hole is defined As “active” when it eats, or “accumulates,” material from a giant disk of material around it.

However, not all of this material ends up outside the event horizon, because a small part is directed from the inner region of the disk to the poles, where it is pushed into space. In the form of jets of ionized plasma.

These jets are able to travel vast distances at the speed of light, before scattering through giant radio-radiating lobes.

Despite the size of the Alcyoneus, the type of radio lobes it emits is not far from uncommon. It is also known that our Milky Way has its own radio lobes.

But one of the most mysterious things about Alcyoneus and other massive galaxies like it is how it grows so large.

Researchers led by the Leiden Observatory in the Netherlands hope that their discovery of the chynos will help shed light on how radio galaxies form and why they are so large.

‘If there are properties of host galaxies that are an important reason for the growth of giant radio galaxies, then hosts of the largest giant radio galaxies are more likely to have them,’ said Martin Oye, of the Leiden Observatory, in an advance copy of the research. paper.

Oi and his team discovered the largest known galaxy Find outliers in data collected by the Low Frequency Array (LOFAR) in Europe.

LOFAR consists of approximately 20,000 radio antennas, distributed in 52 locations across the continent.

Researchers had to remove embedded radio sources from the images to help detect and correct radio lobes for any visual distortions which in turn led them to Alcyoneus.

According to the astronomers involved in the study, the largest known galaxy is surrounded by a cosmic web with a mass more than 240 billion times the mass of the Sun. 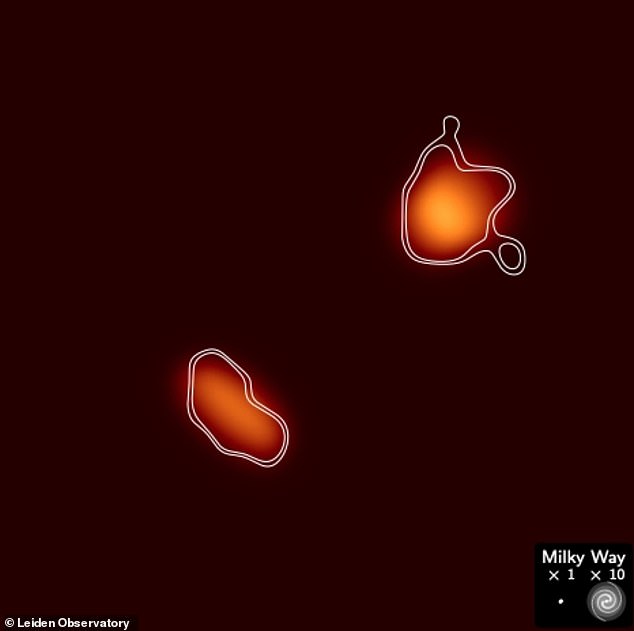 Despite the size of the Alcyoneus, the type of radio lobes it emits (pictured) is not out of the ordinary. It is known that the Milky Way has its own radio lobes 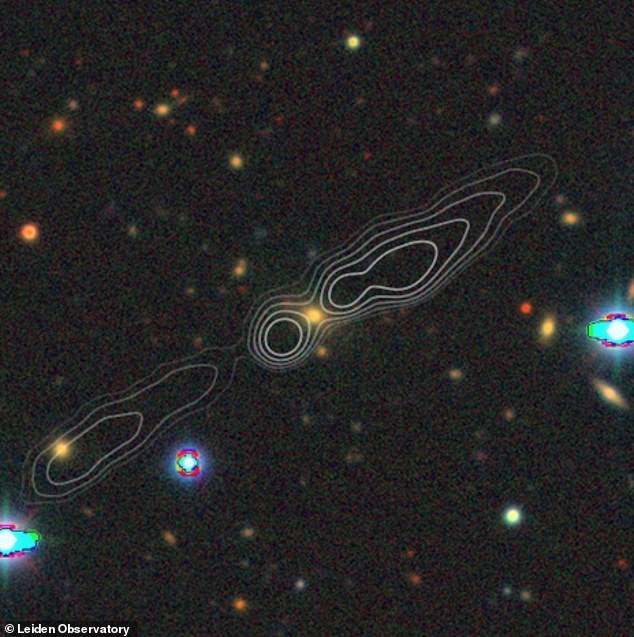 Researchers led by the Leiden Observatory in the Netherlands hope that their discovery of the chynos can help give a look at how radio galaxies form and why they are so large. 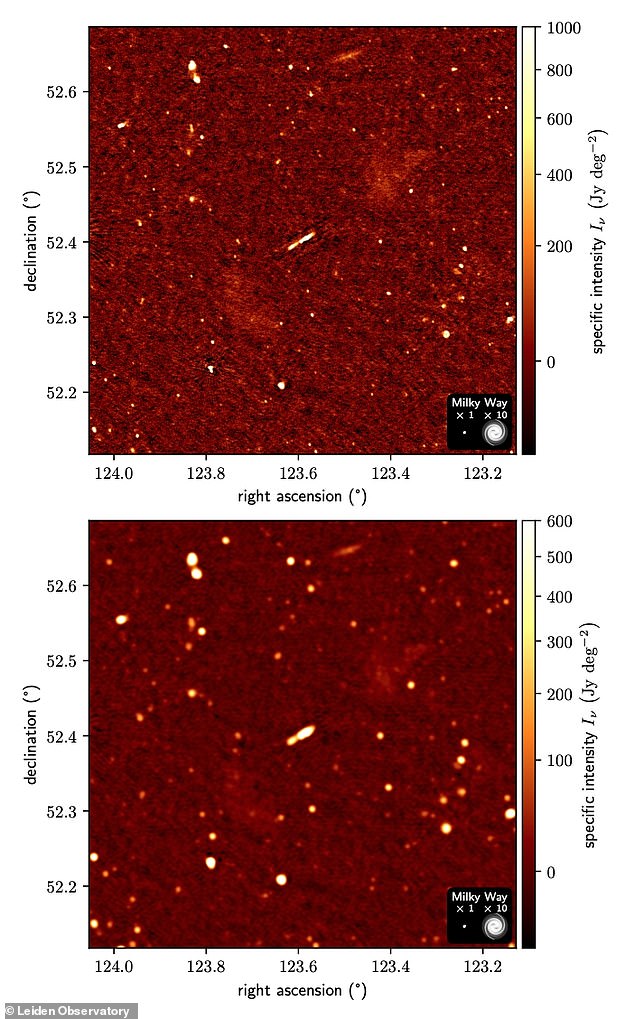 Oye and his team discovered the largest known galaxy while searching for outliers in data collected by Europe’s Low Frequency Array. Researchers had to remove embedded radio sources from the images to help reveal the radio lobes and locate Alcyoneus (pictured)

They also think that The supermassive black hole at the center of Alcyoneus is about 400 million times the mass of the Sun.

Although both parameters seem enormous, they are Actually at the lower end of the giant radio galaxies.

“Far from geometry, Alcyoneus and its host are suspiciously ordinary: the total low-frequency luminosity density, stellar mass, and supermassive black hole mass are all lower than those of the medial giant radio galaxies, despite their similarity,” the authors wrote in their book. paper.

See also  Artemis 1: Why does NASA want to go back to the moon before sending humans to Mars

Thus, very massive galaxies or central black holes are not necessary for the development of large giants, and if the observed state represents the source for its entire life, then there is no high radio energy either.

The researchers hope their study will help astronomers learn more about how radio galaxies originated, how much and at what rate Alcyoneus grows, and whether larger galaxies exist.

The study will be published in the journal Astronomy and astrophysics.

What is the Galaxy Monster?

Brutal galaxies, also known as starburst galaxies, are believed to be the predecessors of massive galaxies such as the Milky Way in today’s world.

Ancient objects appeared shortly after the Big Bang and are characterized by rapid star formation and mass growth, the birth of new stars at rates thousands of times greater than those in our galaxy.

This leads to small but incredibly dense galaxies that quickly burn through all their cosmic gas – the ‘fuel’ used to create new stars.

Once they use up this gas, within about 100 million years of birth, they become quiescent or “red and dead” galaxies — common in our universe today.

Scientists hope that the study of mysterious objects will provide answers to key questions about the formation and evolution of modern galaxies, such as the Milky Way.

Brutal galaxies, also known as starburst galaxies, are believed to be the predecessors of massive galaxies such as the Milky Way in today’s world. This image is an artist’s impression of ZF-COSMOS-20115, a monster galaxy discovered in 2017