Engineers and technicians at NASA’s Kennedy Space Center in Florida drove the Carrier crawler 2 on March 11, 2022, to the doors of the Vehicle Assembly Building (VAB). Soon, you’ll get inside the VAB where you’ll carry an Artemis I Moon rocket to Launch Pad 39B. Credit: NASA/Chad Siwick

Yesterday, engineers and technicians at[{” attribute=””>NASA’s Kennedy Space Center in Florida drove Crawler Transporter-2, which will carry NASA’s Moon rocket to the launch pad, to the doors of the Vehicle Assembly Building (VAB). Soon, the 6.6-million-pound crawler will go inside the VAB and slide under the Space Launch System rocket and Orion spacecraft placed on the Mobile Launcher. Technicians will finish up preparations to transport the rocket traveling at a top speed of 1 mph to Launch Complex 39B for a wet dress rehearsal test ahead of the Artemis I launch.

This week, the Kennedy team also completed painting the NASA worm logo on the Space Launch System solid rocket boosters. While painters added parts of the iconic logo before the segments were stacked, they had to wait until the boosters were fully assembled to finish the job.

In addition, the team continued to haul 20 platforms surrounding the Space Launch System rocket and Orion spacecraft before putting it up on March 17 for beta testing. The rehearsal will be the last major test of the Artemis I mission and will ensure that the rocket, spacecraft, ground equipment, and launch team “sleep” for launch.

Coverage, activities are set for the first launch of NASA’s Mega Moon rocket

NASA will hold a teleconference on Monday, March 14, to discuss the upcoming appearance of the agency’s Mega Moon rocket and the integrated spacecraft for the unmanned Artemis I lunar mission. 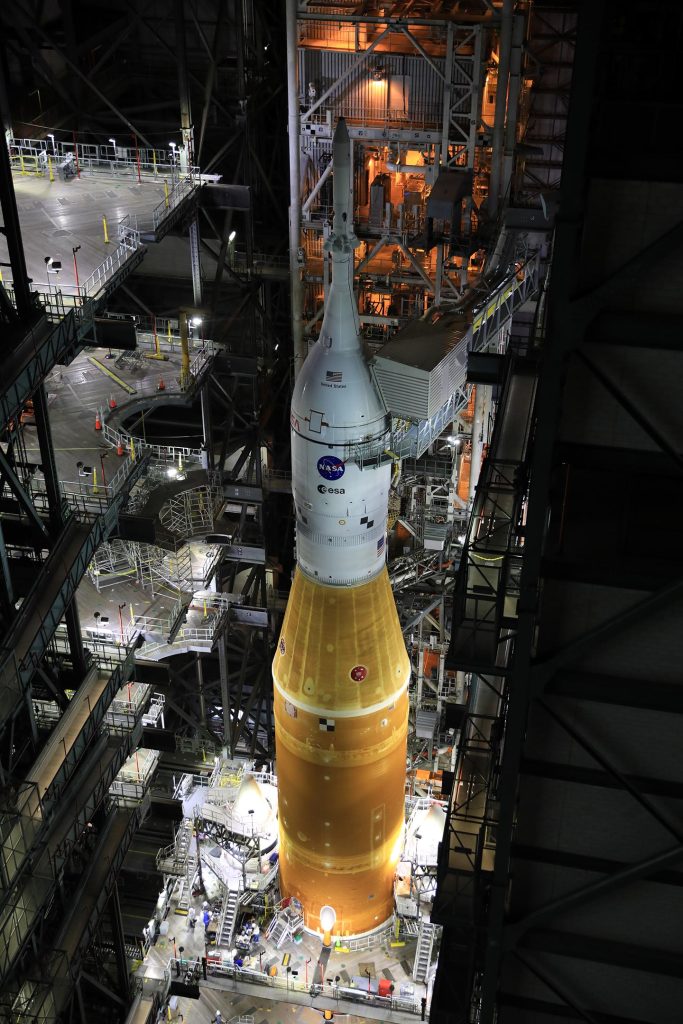 Inside the Vehicle Assembly Building at NASA’s Kennedy Space Center in Florida, work platforms are towed from around the Artemis I Space Launch System rocket and Orion spacecraft in preparation for their launch for testing. credit: NASA

The Space Launch System Integrated rocket and Orion spacecraft are scheduled to launch the 39B launch pad at NASA’s Kennedy Space Center in Florida on Thursday, March 17.

The media call will begin at 5:30 p.m. ET after the completion of a test readiness review, which will determine whether the agency is ready to move forward with mission activities. The call will be broadcast live on the agency website.

Among the conference call participants:

Live coverage of the rollout begins at 5 p.m. ET on Thursday, March 17 and will include live notes from NASA Administrator Bill Nelson and other guests. Coverage will be broadcast NASA TVThe NASA appAnd the agency website.

At the stand, NASA will conduct an earlier final test known as a wet clothes rehearsal, which involves uploading a file[{” attribute=””>SLS propellant tanks and conducting a launch countdown.

The rollout involves a 4-mile journey between the Vehicle Assembly Building and the launch pad, expected to take between six and 12 hours. Live, static camera views of the debut and arrival at the pad will be available starting at 4 p.m. EDT on the Kennedy Newsroom YouTube channel.

Through Artemis missions, NASA will land the first woman and the first person of color on the Moon, paving the way for a long-term lunar presence and serving as a steppingstone on the way to Mars.