Julianne Hough was shining when she hit the red carpet in an eye-catching ensemble while attending Women in Cinema at the Red Sea Film Festival in Saudi Arabia on Friday.

The “Safe Haven” actress, 34, chose a colorful look in a dress with a hat upon her arrival to the party that was held in the city of Jeddah.

The professional dancer, who also appeared charmingly on Thursday on the festival’s opening night, was accompanied by other talented stars during the gala.

Fabulous! Julianne Hough, 34, opted for a vibrant red dress while attending the Women in Cinema gala during the Red Sea Film Festival on Friday.

The former Dancing With The Stars pro slipped into a vibrant red mermaid-style dress with a ruffled cape flowing into a train behind her.

The dress was secured with a halter-style top that clung to her toned-down frame. The length of the ensemble covered her chic shoes as she posed on the red carpet.

Her hair was parted in the middle, pulled back down to give her look an elegant touch.

For dazzling effect, Julianne added a pair of sparkly rhinestone earrings along with a matching bracelet on her left wrist. 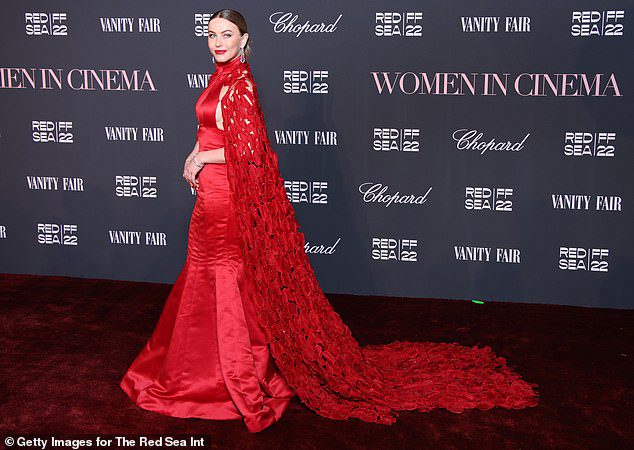 STUNNING CAPE: The red dress featured a long, ruffled cape that flowed down behind her in a long train during a photoshoot on the red carpet 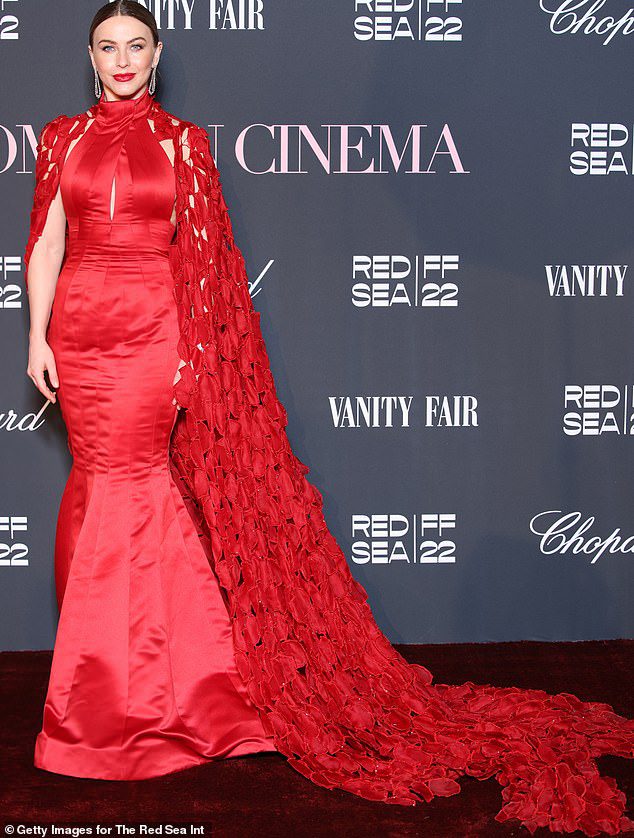 Color Scheme: The Broadway star added a bright red lipstick to match the vibrant color of her dress

The talented star kept her makeup classic, opting for a layer of black mascara, shimmery shadow, and a touch of contour to accentuate her cheekbones.

And for a final touch, Julianne added a bright red lipstick to match the color scheme of her collection.

The beauty gave a closer look at her stunning gown to her 5.1 million followers by uploading a snap to her Instagram story.

The actress and singer can be seen standing on stairs to best showcase her flirty wrap dress.

Julianne was also present at the Red Sea Film Festival on Thursday to celebrate the opening night of the 10-day event. 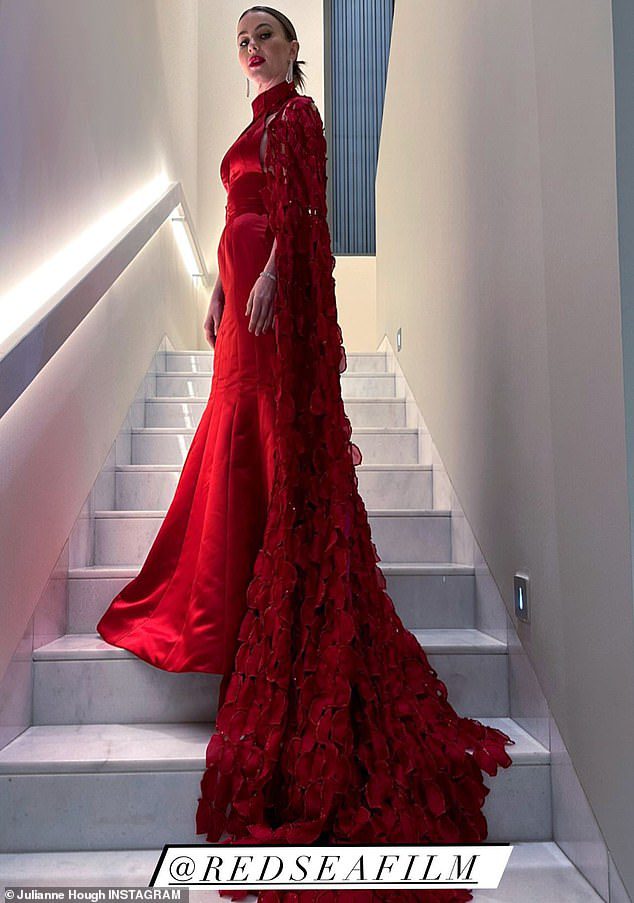 Radiant: Julianne uploaded a snap of herself showing off her look for the evening by sharing a photo on her Instagram story for her fans and followers 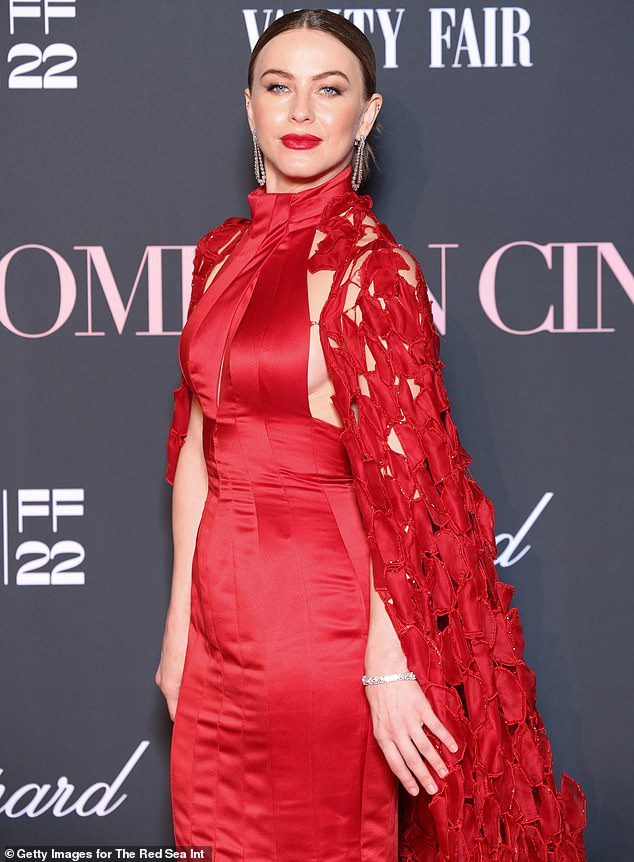 BEAUTIFUL: The star swept her hair into an elegant bun to display a pair of sparkling drop earrings

In contrast to Friday’s ensemble, Julianne opted for an all-black, monochrome look during the first day of the star-studded festival.

She wore a sleeveless black dress with a sheer overlay that flows around the beauty and has ruffled fabric around her neck for an elegant edge.

The Red Sea International Film Festival It kicked off on Thursday, and will continue for ten days to show a total of 131 films and series.

Julianne appeared to be in good spirits as she enjoyed time outside in Jeddah celebrating the industry’s most talented filmmakers.

The star recently made a big move to New York City earlier this year, and took her first role on Broadway starring as POTUS. 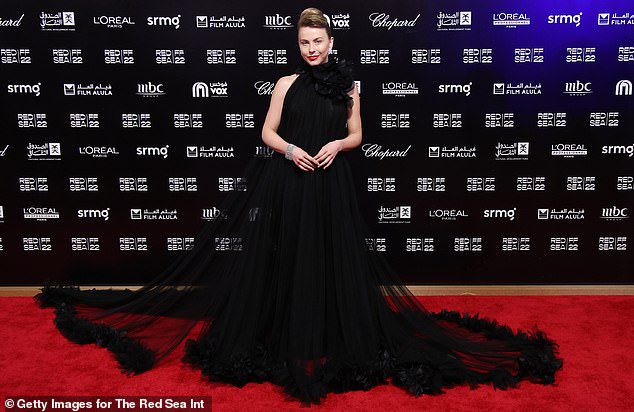 See also  'Batman' sequel in the works with Robert Pattinson 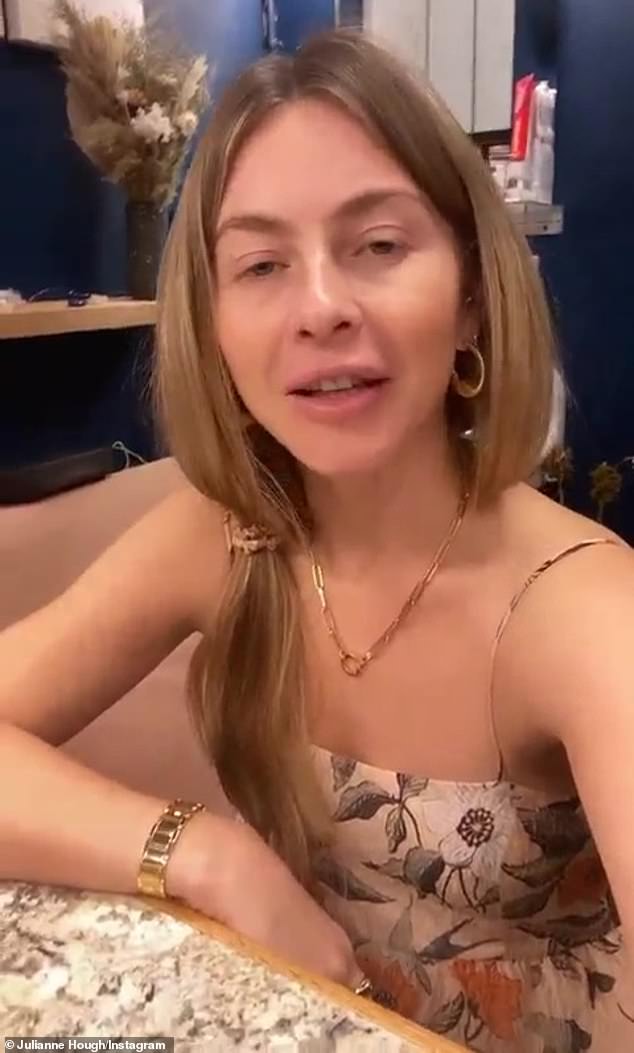 SUCCESSFUL: Julianne will be holding a limited residency in NYC for December 7 at Club Paradise to share her “most vulnerable and hopeful parts of my personal and professional journey through music and dance!”

When the professional dancer talked about officially settling down in Manhattan Entertainment tonight to which she feels, “very embraced and welcome here”.

And I love New York, it’s just incredible. I feel like, like, a whole new energy in this next phase of my life, of my career, and what I want to create and put out into the world.

After spending some time at the Red Sea Festival, Julianne will head back to the Big Apple and prepare for her upcoming limited edition residency at the Paradise Club starting December 7th.

The star announced the news on her Instagram page, saying of the show, “It will be a fun, honest and heartwarming show, where I will be sharing the weakest and most hopeful parts of my personal and professional journey through music and dance!”

The talented performer added to her loyal fans that it was, “a blast creating this show in the heart of NYC,” and that she “can’t wait to share this experience…”